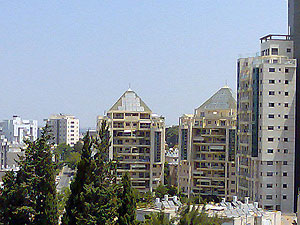 Petah Tikva is a city in the Sharon Valley, near Bnei Brak and Ramat Gan and not far from Rosh HaAyin. Its name translates as "Gate of Hope" and is taken from the book of the prophet Hoshea.

The city was founded in 1878 by religious Jews from Jerusalem who bought a wetland site, which later became known as "Em ha-Moshavot" - "Mother of Settlements."

In the 30s Petah Tikva housed the headquarters of the Haganah.

In 1939, Petah Tikva was given the status of a city. It began to develop industry, there were enterprises for processing agricultural products.

In the 1940s, the settlements of Kfar Ganim, Kfar Avraham, Mahaneh Yehuda and Ein Ganim joined the city.

In Petah Tikva there is one of the largest hospitals in the country - Beilinson.

City streets and attractions near the city:

City streets and attractions near the city:

Israeli Settlements in Judea and Samaria

Religious Cities and Villages of Israel

Distances between Cities and Villages

The Health Care System in Israel

Hospitals and Medical Centers in Israel

Cities and Villages of Israel

Traveling in the Holy Land

The Antiquities of the Land of Israel